He's Having a Baby

A Jewish man with all sorts of ingrained hang-ups about sex tied to his upbringing experiences hardship while trying to conceive his first child with his wife. Although this one-man performance lacks emotion and sometimes gets derailed from its purpose, it is engaging, well-acted, well-written, and flawlessly produced and offers a rarely seen male perspective on having a baby. 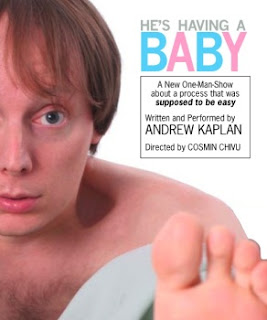 In an age where the male perspective on having kids is usually boiled down to football dad or carrying on the family name, He's Having a Baby (written and performed by Andrew Kaplan) offers a broader, more sensitive point of view on the entire process. Drawing from his own harrowing experience, Kaplan takes us through the whole spectrum of incidents, from growing out of his own childish ways to anticipating his baby's. But while the portrayal of his journey is well-constructed and infinitely entertaining, Kaplan's stories occasionally jump off course and his feelings on the matter seem stoic.

Using only a giant E.P.T. test as his aid, Kaplan employs characterizations that are sometimes silly (a sperm represented as a mobster is of note) and monologues to match the weighty role that conceiving a child played in his family's lives. Constantly engrossing and never predictable, Kaplan affirms the importance of bringing life into this world by not only going through the rigors of predicting ovulation, getting his sperm tested and suffering through his wife's miscarriage, but also by expressing outrage with the constantly fertile and questioning the ones that discard their babies. Although Kaplan does show some conventional paternal interest in having a boy rather than a girl that ties to his own need to see himself reflected in the baby, he also has interests that are more admirable and that further his Jewish heritage as best described by the line "Who am I to stop a bloodline back to Adam?" He continues to delve into his cultural and religious upbringing by defining his views on sex, describing in detail the delayed loss of his virginity, and citing his Yeshiva education as the frame for his desire to reproduce. But as much as his anecdotes and background history are well-written and theatrically exciting, they are digressions from the actual baby-making, no matter how much he tries to rope them into the main theme. Also, although Kaplan's carefully chosen words and scenes have the potential to elicit various emotional responses from the audience, Kaplan himself appears indifferent from beginning to end. Despite a verbal break from his "32 years of suppressed crying" with his baby's birth, Kaplan chooses to either not revisit his overflow of emotions from a performance standpoint or simply cannot access them from his own testament of stoicism.

Cosmin Chivu directs Kaplan in a performance that is filled with humor and fun. In spite of his failure to communicate sorrow and pain, Kaplan does connect through the audience with frequent eye contact and regard. Evan O'Brient designs insightful lighting that supports the gravity of the situations as well as the absurdism. Kaplan learns through trial and error that the baby-conceiving manuals aren't always correct, and even investigates an unpopular, chuckle-worthy use for the all-purpose Robitussin: a thinner for cervical muscles. Through narratives, Kaplan discusses the ways in which society handles conception, and the dangers and responsibilities associated with making that decision. It is a loaded job, but one that you are happy he decides to take by the end of his 85-minute undertaking.

VBAC Productions' world premiere of He's Having a Baby asserts the impact that having a baby can have on men in a world where men are often silent or absent. It is a rarely-investigated point of view in a society where there is a growing surge in sperm banks and obstetricians trained to perform artificial insemination. This production recalls to mind Amy Wilson's recent one-woman show Motherload, but differs not only in content (Wilson's is post-birth), but also in the reliance on technology and showmanship. Yet, it can be improved. Already a good show, a tighter weave of the stories and a stronger show of emotion can make He's Having a Baby much better.