Brad, sleeping on a couch, startles awake a short while after Davy's noisy entrance, wildly wielding a scrappy hunting knife from behind one of the couch’s unfashionable plaid cushions. Jumping to his feet, we see Brad is dressed in ratty red head-to-toe long johns, and some sort of animal costume that is halfway off, and tied disturbingly around his meager waist. Davy, meanwhile, is attempting to mend a stuffed dummy’s ripped neckline while drinking his recently opened beer. It’s been less than a minute since the lights went down, and there is already no shortage of compelling action. Dogs is already good. 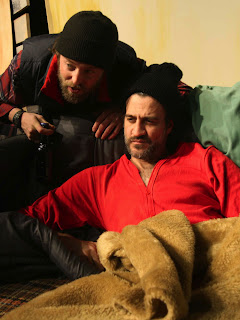 Two brothers are living sparingly in a run-down Alaskan cabin. They have recently invested their only money in a pack of dogs – supposedly huskies. The goal: to train them. To be attack dogs. Then sell them to those desperate enough to want an attack dog. These two are attempting to follow in their father’s footsteps, though from the sounds of it, his footsteps are far from ones to follow. Brad (Ross Partridge), the older brother, has been more or less home-ridden since his return from a short stint in jail. And he can’t get himself to stop wearing the old bear costume his mother made during his more tender years. The younger Davy (Joshua Leonard) has also been out of work – in fact, the town they live in seems to be beyond the edge of desperation since there has been zero work in the local cannery factory – and so he has turned his focus towards the dogs. The bloodied bandage around his wrist, however, is not a sign of success.

There are plenty of plays out there about complicated family relationships or which focus on the underprivileged. But what we are usually shown on stage are characters of a certain intelligence level. They are aware of what they are not receiving in life, and why. The unevenness of the world, of their situations, often compels the play, and the characters’ individual intricacies, forward. With Dogs, that is not the case. These are not characters usually put on stage. They are not intelligent. They are not self-aware. Yet they, too, are complicated. Brad and Davy’s lives are filled with coping mechanisms and resentful co-dependence. Their dreams are real, and even realistic – making their inevitable failure – clear from that first dog bite on the wrist – unequivocally sad.

“You can get paid a hundred bucks a day just to be an extra. Even more if you have lines.” Davy tells Viv, the new girl in town who already has a reputation for being easy. His dream is to move to L.A. to be an extra – perhaps score a line every now and again. He never speaks of being famous, or even rich. Viv(Jennifer LaFleur), too, has created coping mechanisms in her life: “It’s not my fault they’re horny,” she says of the men in town – the cannery workers who outnumber the women ten to one. She fiercely wants to be independent, but she is also full of fear, perhaps even justly so.

Playwright Norman Lasca has an artistic voice that is thick and complex, but also direct. He does not ask for sympathy from his viewer, but for acceptance. The emotional sores he leaves are about the truths in this play. These truths are, in many ways, the inevitables we already know; but we are frozen in our seats, waiting for these characters to reach them as well.

A killer creative team surrounds Lasca’s talent. Director Justin Ball is unafraid of the play’s grime, and successfully chooses not to polish over anything. The three actors – Ross Partridge, Joshua Leonard and Jennifer LaFleur are all impressive. They understand the limits of their characters, and do not attempt to superimpose unnecessary motives or morals. Set designer Kenneth Grady Barker has produced a rendering of a dilapidated cabin any theater would be proud of, and Christina Watanabe’s lights are the right balance of eerie and desolate for the play’s tone and locale.

Productions like this are not easy to come by – writers like Lasca – who is more or less unknown to the New York theater world – rarely receive such well-done premieres of full-length works. But it is also an extraordinary experience, as a theater-goer, to have: to be shaken by a pounding new theatrical voice.