The recession has affected everyone differently, and each outcome gives way to a story to be shared. Almost ironically, the Flea Theater has seized this as an opportunity to commission six playwrights to write short plays about the recession so far. Running from surreal and silly to schlocky and safe, the evening is half successful, with only three playwrights taking a big enough risk. 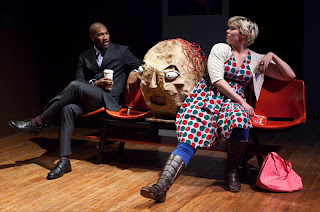 The Flea Theater has commissioned six playwrights to create individual shorts on their take on the economic crisis, entitled The Great Recession. The evening consists of lots of silence, a few laughs, but mostly awkward moments where the playwrights’ try too hard to be witty or relatable, only to make no connection with the audience at all. The exception lies when the playwright and director work together to create identify conflict and struggle in which to override any generic thematic structure. This only accounts for half of the production, however, and the back-and-forth of stark, memorable drama to predictable setups make the evening imbalanced. The anthology lacks coherence and tie-ins from piece to piece, losing something a little each time, and not quite ever gaining it back.

Starting the lineup is “Classic Kitchen Timer” written and directed by Adam Rapp, in which a young woman, Sarah Ellen Stephens (Lucy Norwood,) leaves her hometown to take part in a “social experiment” which, if completed, results in a grand prize of $25,000. Sarah begins to reveal the underlying conditions as she gets interviewed by the evening’s Host (Nick Maccarone). Her subdued responses and ensuing serious, lingering beats imply her concerns about the arrangement go beyond monetary reward. Norwood portrays Sarah with steely eye contact and a trembling, fearful delivery that leaves chills and builds tension and Maccarone, an eerie clown in white powder, red lips, and suspenders, engages the audience with the same congenial-yet-creepy demeanor he later extends to Sarah, generating both anticipation and fear. Rapp’s thirst for drama shows in his writing, and the situation he constructs here does a great job of combining personal ethics with financial constraints.

In the next play, “Fucked”, written by Itamar Moses and directed by Michelle Tattenbaum, a young couple, Cindy (Jessica Pohly) and Reed (Dorien Makhloghi,) squabble over a vacation funded by Reed’s father. This premise never gets off the ground, however: Pohly’s performance remains stuck in whiny melodramatic girlfriend gear and Makloghi, as Reed, remains apathetic and unresponsive, with halted, detached line delivery. “New York Living” by Thomas Bradshaw follows closely to Moses’ lead with even less success. Bradshaw’s characters lament about the recession in another modern New York setting, but again do not react as if truly affected. Jeff (Raúl Sigmund Julia,) an actor with a trust fund has had relationship trouble with his fiancée Jen (Morgan Reis,) and he redirects his emotions towards his costar Adrian (Anna Greenfield) in a play directed by David (Andy Gershenzon). This clunky and poorly-coordinated love rectangle never develops depth or dimension, relying instead on pulp dialogue and outlandish quick fixes to the problems at hand.

Erin Courtney balances out such a shaky intro with her play “Severed”. Under Davis McCallum’s direction, young, optimistic job-seekers perform interview-style monologues in the hopes of scoring a new gig. McCallum’s sincerity for her subject shows through and through, and never crosses the line to become preachy or moralistic (the characters don’t mention the recession at all). In addition, “Severed” has an amusing subplot that allows actress Amy Jackson to shine as a hungover daycare supervisor on her morning commute. Out of the fifty-something actors in The Great Recession, Jackson by far proves the most delightful with her smiley, giddy, and goofy performance. She knows how to cast it out for big laughs, but also how to reel it in and replace it with just as entertaining sass and sarcasm.

Also notable is Sheila Callaghan’s “Recess” in which eleven people share a one-room apartment refugee-style, relying on government authorization for everything from food rations to basic utilities, living without walls, telephones, internet or even proper clothing. Out of desperation and frustration these characters retreat and isolate themselves and then reach a point of hysteria before turning on each other. With its stark, terse writing and Kip Fagan’s brilliant staging and directing, Recess resonates with extreme drama and shock factor, surpassing all the other shorts.

“Recess” proves a tough act to follow, and “Unum” by Will Eno with director Jim Simpson leaves the entire evening on a low note. Set in an obscure American town where mortgage interest rates soar and money keeps getting printed by mint factory workers, the drama Eno tries to set up never catches. Instead, each dialogue exchange sags by unmotivated, unconvincing actors, and the generic complaints of tough economic times pile on, from job losses to the rise in healthcare costs. This effect of echoed, regurgitated jargon about unemployment and poverty feels strained and rehashed, and doesn’t do much to entertain and enlighten. While it does have its moments, The Great Recession by the Flea Theater plays it too safe to really hit home and resonate with the audience.