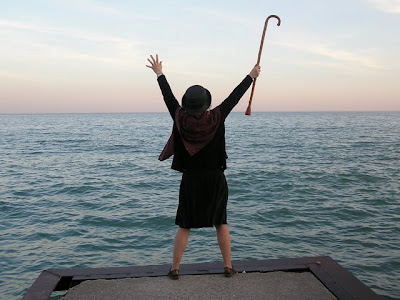 Debra Hale’s Freedom 85! may be a condensed two-woman show, but multiple characters and slice-of-life storylines transcend this short, modest piece into an evening of thought-provoking and quality theater. Andrea Risk joins Ms. Hale onstage and throughout the night they switch in and out of different gender identities, ages, and ethnicities with ease and swiftness. Playing a sassy Jamaican diner owner trying to push the daily special of curried goat one minute and a shy recovering alcoholic new in town and looking for a fresh start the next, Hale gives an excellent performance with equal parts overflowing attitude and restrained vulnerability. As for Risk, first introduced as an aging British mother who refuses to move into an assisted living facility, she then almost instantaneously morphs into the concerned son who wants what’s best for his mother but can’t articulate the sentiment due to his gruff exterior.

Hale's chameleon-like script matches the versatility of the actresses, spanning geographical and historical distances. Director Kim Blackwell uses well-timed changes in music and lighting to make these shifts, but also maintains the theme of minimalism by limiting her use of any loud sound effects or bright flashes. This approach keeps the actors at the center of it all, letting them do all the work. It also keeps the pace moving and covers a lot of ground as it relates to plot while never allowing the audience to get too comfortable with one scene or character.

Short, intermittent flashbacks, for example, keep too much backstory from clogging up the dialogue while also helping bring to light present-day motives or behavior. An elderly woman’s fear of living alone suddenly makes sense when you see her years earlier in WWII England, shielding herself from air raid bombs and sirens while also trying to keep her little sister safe. Even the less dramatic aspects of the script have an overwhelming sense of sincerity. Common enough incidents like the torture of starting a new waitressing job during a breakfast rush or drinking too much at a wedding where you don’t know anybody ring distinct and isolated onstage, evoking visceral gut reactions of sympathy and concern from the audience.

With razor wit sticking out from all sides bound by a central theme of friendship, this play portrays the true landscape of a small-town diner and the stories behind its colorful regulars from all walks of life.

An intriguing talent north of the border, Hale debuted Freedom 85 last summer in Toronto. Great to see her receiving recognition well-deserved on the New York Stage! I expect this is but a brief sample of what is to come!

Kim Blackwell is a wonderful director. I hope New York has the opportunity to see more of her work.