Eight is an impressive premiere that establishes the young Ella Hickson as the sort of playwright who is not only good at listening but good at hearing. Thanks to her insight and the growth of the actors who so embody their characters, this collection of monologues is an embarrassment of empathetic riches, and if you're looking to hear a fresh new voice--or eight--this is the show for you. 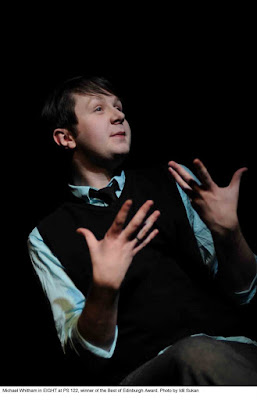 We draw our own conclusions about the eight young men and women of Eight before they even say a word. That's partially why the writer and director, Ella Hickson, has them stand in a silent line as the audience files in. They don't remain blanks for long: each has a monologue—the theatrical form of the short story—and over the course of the next few hours, they'll share them. At the Edinburgh Fringe, audiences voted for the four stories they most wanted to hear; given the somber tone, it's actually a relief to not have to choose. Instead of coming across as a jaded for a 23-year-old, the cumulative effect of all eight monologues is a wintergreen breath of fresh air.

It's a little ironic, because while Hickson's characters are trying to find a place for themselves, she's established herself as a darkly comic playwright. She's also a social critic, using Millie's (Ishbel McFarlane) "marital supplements" business to declaim a feminism that she doesn't see as freeing and Miles (Solomon Mousley), a survivor of the 7/6/05 London bombings, to say that it's more important to have something to dream for than to have everything you dream of. The suicide of André's (Michael Whitham) boyfriend is used to comment on the insidious loss of identity created by a homogenized homosexuality; the glory of following his father's military legacy only reminds Danny (Henry Peters) that he wants something else. The one optimistic monologue comes with a disclaimer: Bobby (Holly McLay), a working class 22-year-old single mother of two, will need magic—that created by determination—to make Christmas better than real life.

Eight was a rushed-to-Fringe project, but by now, the actors have settled magnificently into their roles—particularly McLay, whose frustration is palpable, and Simon Ginty, whose portrayal of Jude ranges from a naïve 17-year-old boy dreaming of "bikinis" to that of an obsessed teen on the brink of sexual discovery and finally to that of a post-coital, disillusioned man. Some of the monologues remain a little too written—Mona (Alice Bonifacio) is driven by her mother's bohemian recklessness into the comfort of stricter religion and Astrid (Gwenie Von Einsiedel) cheats on her husband so as to beat him to the punch—but only comparatively speaking. As for the language, it is consistently stunning: "The house became a big, toothless mouth, with gaping gaps where all the doors had been" and "Her cheap knickers on the floor, you like to think they're cheap—they're probably not, they are probably more expensive, more see through, more size eight than yours have ever been."

Eight is an impressive premiere that establishes Hickson as one of those people who is not only good at listening but good at hearing, and it is a pleasure to see that empathy echoing through even her saddest monologues.