A slave couple's love and union is tested in this compelling drama. Although the production has problems, the acting and dialogue are both strong. 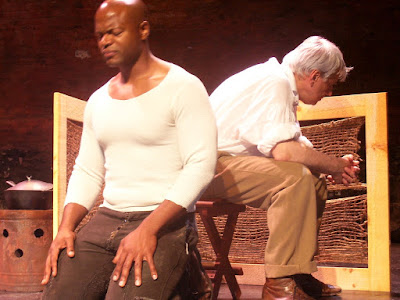 Cynthia G. Robinson's Ascension is a startling look at the damages that slavery did to the black family structure. The story centers on Ruth (Annie Lee Moffett) and Jacob (producer Cezar Williams), a God-fearing couple in Pike County, Alabama, 1850, who are getting ready to “jump the broom” (an illegal wedding between slaves). Despite harrowing circumstances—Ruth is regularly coerced to have sex with her “owner,” Master Carlisle (Greg Homison), and Jacob serves as a “buck” (a strong slave used as a breeder for more strong slaves)—the couple's deep love for each other is evident in the actors' chemistry. Mathilda (the sensational Richarda Abrams), Ruth's African, black magic-dabbling friend, serves as her vigilant protector and foster-mother. Carlisle has promised Ruth that he'll stop paying her overnight visits once she's married, but his promise proves to be a lot more complicated than he realized. Soon, Ruth is pregnant, and doesn't know who the father is.

From the beginning, Ascension is powerful and encompasses almost all aspects of the emotional and physical trauma inflicted on slaves. However, although Petronia Paley’s seasoned direction elicits some incredible performances and the period costumes by Paley and Robinson are spot on, certain things (like the makeup) are too polished, and others are loose, as when the rapport and glee between an escape-happy Ruth and Jacob fails to suggest misery. In one particular fight scene, Michael Wilson seems to have choreographed the reckless abandon right out of the show.

Robinson does a good job of intertwining heart-wrenching lines with funny circumstances even when the dialogue gets talky; that in itself is a difficult feat given the hardships of the couple. However, Ruth interjects impromptu, somber singing into the dialogue that sounds spurious. The scene divisions, uncomfortable and unclear at times, are distracting to the show, but Gilbert Glenn Brown's nature sound effects reflect the changing time of day and the country setting, and bring the audience right back to the ordeal at hand. Ascension may not be perfect, but it elevates our empathy concerning slavery. Other plays have presented slavery as intellectually jarring, but Ascension makes it emotionally stabbing.
..........................................................
Ascension (2 hours with intermission)
The Cherry Lane Theatre (38 Commerce St.)
Tickets: $15 http://www.fringenyc.org/
Posted by Cindy Pierre at 8/21/2008 11:49:00 PM