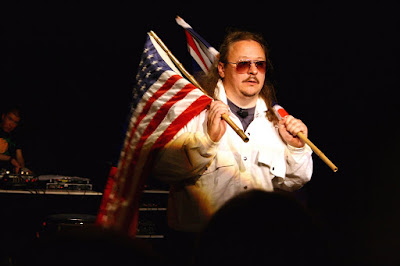 If Nikolai Khalezin were to perform Generation Jeans in his home country of Belarus, in a public theater, he'd be thrown in jail as a "political," given the silver scoop of a spoon (the whole spoon might be used to commit murder, as if, Nikolai observes, a wall wouldn't do just as well), and confined to cramped quarters during his imprisonment. But he performs anyway, secretly, in private apartments, because he is a jean-wearing freedom fighter, and though it is dangerous to shout "I am free" when the black club of a policeman is swinging toward ones face, it is a phrase he knows must be said.

With so much weighty relevance behind it, Generation Jeans doesn't need to be very theatrical, and the majority of the show is simply Nikolai sitting on a high stool, speaking directly to us. It works, because Nikolai's lack of refinement speaks toward a greater honesty; he is one of those rare performers not trying to dazzle us, but simply trying to speak what must be said, in the only way he knows. That said, it is somewhat odd to see a DJ on stage with him (Lavr Berzhanin, a k a DJ Laurel), especially since the samples of music used are mostly electronic beats that don't tie into Nikolai's biographical tale of growing up craving AC/DC or The Sex Pistols. But even this device generally works: Nikolai speaks so plainly, without exaggeration or the all-too-common frenzy or caricature of solo performers, that his text keeps the music in the background, allowing it to filter through only for a meditative emphasis, which it successfully does for two of the key moments of tragic catharsis.

For a show that is for the most part performed so plainly (it even remains in the original language, with subtitles to guide us), Generation Jeans still manages to wake us up to the power of imagination, especially as Nikolai stands on stage, his arms wrapped around the flimsy bars of a representative cage, quietly envisioning verdant, emerald green meadows, or the noisy but wide open, sunset streaked runway of La Guardia Airport, thinking of anything, everything, that will help him continue on. 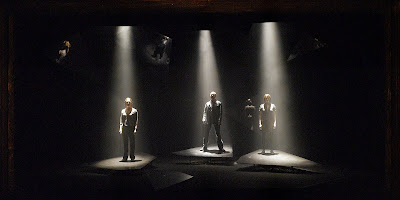 Photo/Ros Kavanagh
If it weren't for Mark O'Rowe's clever verse (e.g., smitten/admitten, invective/ineffective, identical/antithetical) and graphic language, it would've been hard to sit through his ninety minute triptych of monologues, Terminus. Harder still given the taste of thick smoke in the air and the dim and sideways illuminated sight of the actors on stage. But the language justifies the appearance of demons (composed of worms), easy-going psychopaths, and matter-of-fact violence by elevating it to the metaphor of poetry. Though I'm not sure there's a hidden meaning to a man swinging from a crane by his entrails with a demons barbed tail sticking out of his mouth as he sings "Wind Beneath My Wings," it seems not only plausible in O'Rowe's world, but oddly humorous, too, an impressive feat for such a dark piece. (It brings to mind similarly glamorous works of violence, like The Lieutenant of Inishmore.)

Watching Terminus is much like looking at one's own reflection through a broken mirror, which is why Jon Bausor's set -- a shattered pane, with the actors each standing on and beneath large slivers of glass -- is so effective. While the darker schisms of the play are hopefully not a part of our souls, the basic characters are: Andrea Irvine, for instance, plays a counselor who only takes up violence after she is much abused by a violent girl named Celine, and the only sin of Eileen Walsh's character is that she so badly wants a man that she loses herself, literally, for one. As for the mass-murderer, he is played so glibly by Aidan Kelly (think of Ciaran Hinds's performance in The Seafarer as Mr. Lockhart), that we actually sympathize with a shyness so overwhelming that it leads him to constant crime. These performances, given without a trace of poetic showmanship, are what ultimately ground the fantasies of the show, and while the ending isn't exactly the blast of white revelatory redemption that's foreshadowed, it is a satisfying close to one heck of a ride.

There isn't a person out there who will leave Disinformation saying anything negative about Reggie Watts's voice: the man is an aural artist, capable of many octave-spanning notes, and that's without the assistance of his voice modulators and track-recorders, two twinned devices that let him layer distortions upon distortions upon himself. However, this show seems more like a sampler of what he can do than a statement of anything worth saying, and one of his faux-corporate slogans rings a little too close to home: "The More That You Use, The Less That You Are."

That said, there isn't a person going to Disinformation who won't be amused. From his satirical intellectualizing (his stuffy accents are enjoyable) to his retro film clips, Reggie Watts really knows how to pick his words carefully (even at their most vulgar, his "Shit Fuck Sandwich" rap is still eerily specific). It's not clear where a heart-to-heart between son and father comes in, but his mispronunciation of words like "Swiss" and "balcony" ("swize" and "balconey") is funny, as is his description of a gay night club: "It was so club. There was a floor, a ceiling, and some sort of thing that keeps those two apart." For that matter, so is his constant deadpan, a tact emphasized by his office casual look, and his too-small tie, or simply the way he unapologetically asserts himself: "Whether you're a man or a woman, or simply a man." It's nonsense, but a nonsense that we can enjoy.

Whether providing sound effects for Amy O'Neal's dancing or warbling alongside Orianna Herman, his sheer ability will always ensure he has an audience. But whether or not Reggie Watts can actually use his myriad talents to tell a story, as The Suicide Kings have with their spoken word drama, In Spite of Everything, or if he's content to just play around with short skits in various forms of mixed media . . . that's entirely up to him.
Posted by Aaron Riccio at 1/14/2008 11:59:00 PM