The intimacy of Sister Cities is at times almost unbearable; the audience is drawn into a heavy confrontation between four sisters as they unravel the events leading to their mother’s suicide and each sister becomes personally unraveled as well. Playwright Colette Freedman keeps the intense drama strongly grounded in reality and, under Cat Parker’s direction, the play is beautiful and devastating. 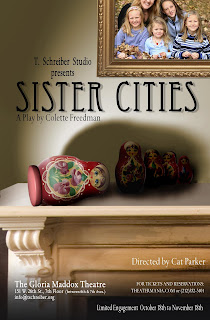 To stage a taut family drama, there is no place quite like the intimate T. Schreiber Studio. Just as with their production of You Can’t Take it With You earlier this year, the audience is seated virtually within the boundaries of the Baxter family living room where four very different sisters are mourning their mother’s suicide in four very different ways.

Like the nesting dolls that feature prominently as a symbol of the family unit, the play contains within it many different versions of itself: it is the story of a family tragedy, but it is also very funny. It is fraught with current medical ethics issues and references to pop culture. Between walls full of family photos and a dozen bottles of vodka, the sisters hash out the circumstances of their mother’s final months. Uptight Carolina (Ellen Reilly) demands to get everything out in the open immediately so she can return to her orderly professional life as a lawyer and her messier personal life as an unhappy divorcée. Inoffensive, people-pleasing Dallas (Emberli Edwards), whom her sisters repeatedly accuse of being “perfect,” is glad to be free of her mother’s tyrannical influence while free-spirited Baltimore (Jamie Neumann) keeps a relatively even keel and uses her Harvard-trained sociology expertise to analyze everyone else’s reactions. Sarcastic and confrontational Austin (Maeve Yore) was the only one who was living at home and who knows the truth about their mother’s state of mind and her final moments. The sisters spend the day pulling toward and away from each other, reminiscing and recriminating, while waiting for the coroner to arrive and remove their mother’s remains. Luckily, the actresses are all evenly matched and skillful enough to present the push and pull of this emotional tug-of-war in a way that grips the viewer by the throat.

In this family, each member feels like an outsider. No two sisters have the same father, nor do they share much in common beyond their mother. Each sister’s distinctiveness is indicated by her distinct styles of dressing, the physical isolation she experiences in relation to the others within the confines of their mother’s living room and even the way she puts up her hair. George Allison’s set capitalizes on the Studio’s space; together with Carolyn Mraz’s set decoration, the set embodies a very realistic suburban living room. Karen Ann Ledger’s costumes also speak volumes as to the wearer’s personality.

As the play proceeds, each of the sisters also proves herself to be both beautiful and terrible and very human. But where the first act raised thought-provoking questions about the ethics of suicide and just how far a sibling bond can be stretched before it snaps, the second act counters with pop-psychology issues and comparatively petty traumas that lack the dramatic resonance of the play’s beginning. However, the emotionally fraught performances each actress renders, and the relentless momentum of the first half are the heart and soul of Sister Cities; it is a moving and relevant look at how our families both shape us and break us.

I saw this play when it opened in Los Angeles. Your review resonated. It was an amazing show and a groundbreaking work by playwright Colette Freedman. I look forward to seeing more of her upcoming productions.