Does the citycountryworld have you down? Then avoid all truthy-making pointies and check out the silly talkenings of the Weimar-inspired Kinderspielers. Anything but a complete waste of time, the infantile improvisations of this theater-troupe-within-a-play are as appropriate for American depression now as they might have been in 1923 Germany. 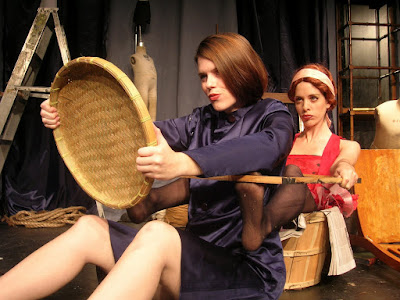 You'd have to be a foolyheadgirlthing to write a play set in an absurdly fictitious (but not improbable) cabaret in the Weimar Republic (1923) and to then quote Oscar Wilde's maxim: "All art is quite useless." You'd need quite a pair of balls to brag about how the expressionist theater company, the Kinderspielers, "dare to entertain you by completely wasting your time." And you'd need to be awfully clever to make a critic one of your characters, especially if her theory is that "frivolity is serious business."

I guess that makes Kiran Rikhye a large-balled, awfully clever, foolyheadgirlthing: her latest work with Stolen Chair Theater Company, Kinderspiel (child's play) is a double-bill that is avant-garde Cabaret ("infantile improvisation" meets lesbians and garters) when it comes to presentation, and starkly satirical when the plot is narrated to us "children." The play not only stands as a testament to the insane depression of the Weimar era, but illustrates the similarity between genius and insanity, and the odd power of art to transform one's perception of reality. Furthermore, by adding a journalist, Rikhye is also able to make an point about the danger of an explanation, with her mind clearly in favor of spontaneity and personal experience. (Do we demean things by giving them meanings?)

Her focal point is Louisa Reissner (Alexia Vernon), a popular burlesque dancer who is cast out of the spotlight when insane inflation (the program notes put it at 1.3 trillion marks to 1 dollar) dwindles her audience. Louisa flees into her own mind to sustain that flame of popularity, retreating into an innocent form of self-indulgent, childlike play, at which point she is stumbled upon by Max (Cameron J. Oro), an effeminate playboy with a mouth so full of candy, that he walks around, eyes glazed with the pointlessness of it all. Louisa's unforced behavior and deconstructed grammar ("Whatever we wants to, that's the pointy.") sparks a life in him that he thought lost, and the two begin to play.

They play so happily that the narrator, Heinrich (Sam Dingman), not only calls off his own suicide, but begins to sell tickets to their late-night sessions in an abandoned underground nightclub, finding the purpose the war took from him. As the play continues, they are joined by Sonja (Liza Wade White), an experimental, hands-on journalist who is thrilled by what she sees as a political statement (not to mention turned on by the loose Lousia), and Anna (Layna Fisher), a conservative widow who wants the dream, but can't overcome her inhibitions ("If things aren't clean, they're dirty").

Under St. Marks is the ideal theater: designer David Bengali pretty much just exposes the dingy frame of the space and then adds floor lights (not to take away from his work; it's so authentic). And from what I've seen, Jon Stancato is the ideal director: though Stolen Chair credits the entire cast and crew with Kinderspiel (such experimentations are the reason to support individual companies), Stancato is ultimately like the third-grade art teacher whose students make great fingerpaintings because he knows when to take the paper away from them. There's also a deeper sense of purpose to the lengthy cabaret demonstrations when in Stancato's hands: they build (along with Rikhye's script) to a point at which the playing is less innocent and more political, intentional or not, and the imaginary delivery of a stillborn child is a harsh scene.

Stolen Chair bills itself as a company dedicated to the "theft" of "historical performance styles," but it's a crime for which they'd never be convicted. Between this and their recent Commedia dell'Artemisia, they're dramatic Robin Hoods, stealing from a rich theatrical past and producing for a poorly educated present, and I look forward to their next production.