An enjoyable musical romp with rose-colored glasses for all, Pinkalicious is a sweet slice of children’s theater even a cold, childless adult can digest. 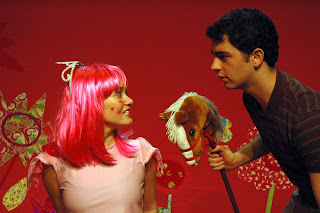 
When I was five years old, my mother took me to see my first piece of theater, Into the Woods. I was instantly transfixed by the story unfolding before me, the kings, queens, and assorted bread-bakers of my childhood fairy tales not only alive and well, but dancing and singing just yards away from me. I was amazed. And then, in the second act, when the Baker’s Wife ends up having sexual relations with Cinderella’s Prince, when the a cawing flock of birds peck out the stepsisters eyes until blood runs out down their gory faces, when Rapunzel is crushed to death by the terrifying Giantess – well, by the time the curtain fell, I was in need of therapy for years to come.

Thank goodness for Pinkalicious (playing at Vital Theater through February 25th). This good-natured, whimsical and death-devoid children’s show helped me have a breakthrough – here was the musical I should have been taken to all those years ago.

Based on Elizabeth and Victoria Kann’s children’s book of the same name, Pinkalicious tells the story of a young girl named Pinkalicious Pinkerton (played by the vocally-flat but adorably forgivable Meg Phillips), her overtaxed mom and dad (Kristina Wilson and Korie Blossey, respectively), and her attention-starved and subtly gender-bending brother Peter (Alan Houser). While Mrs. Pinkerton is absorbed in obsessive dusting and compulsive baking, Pinkalicious drops the entire bottle of “pink” into the cupcake batter, creating delicious – though not so nutritious – magic magenta treats. Pinkalicious eats one too many of these rose-hued sweets and wakes up the next morning having mutated into a striking shade of pink. Musical mayhem ensues.

The production is modest – staged in a small theater up on the fourth floor of the Vital building, the show uses ingenious stage tricks to open up the space and trigger the audience’s imagination. Four pink sparkling batons and some good choreography render a bicycle built for four out of thin air. A forbidden midnight snack becomes a journey through animated furniture and dancing cupcakes, thanks to smart set design and blocking. These production decisions are strikingly uncomplicated, but somehow, especially in the late-night kitchen scene, they pulled me back into that eerie and magical mindset of childhood – a mindset where the world can shift into (and back from) that of fairy tales in the blink of an eye.

Taking off the rose-colored glasses, though, the show has its flaws. The singing was simply not up to par, with the exception of the strong-voiced and charismatic Molly Gillman as Dr. Wink and Allison. The lyrics were uneven, at times smart enough to leave even the most senior audience member tickled pink, but just as often forgettable and uninteresting. Also, despite brilliant staging, the show’s dance choreography felt restrained – as if the actors were afraid to fully fill the space, as if the stage was already far too packed with pink to allow the dancers adequate room. Still, the kids watching the show were more than happy to overlook all these problems. The audience, at least half children and at least 90% female, seemed transfixed by the pink parade onstage. I expected children’s theater to be more about the children than the theater, with wails and whines from the seats trumping any scripted song or dance, but during Pinkalicious, even the youngest viewers were calm, quiet and well-behaved. If only Pinkalicious could be performed on airplanes…

Overall, the show was an enjoyable, uplifting experience, and even without a single child in tow, I found myself having a great time at the theater. The Kann sisters, with the help of lyricist John Gregor, told a surprisingly complex and satisfying story. Every character in this play had his or her own arc. From Pete’s wish to finally be seen as the pink-loving boy he truly is, to Mr. and Mrs. Pinkerton’s struggle to keep their marriage fun, to Dr. Wink’s near fetish-level of excitement for studying the rare disease Pinkititis, everyone onstage has their own story to tell. It’s wonderful to see children’s theater meet the standards we use to judge adult productions. In that respect, Pinkalicious is, indeed, in the pink.

Don’t get me wrong, though; I’m not saying discard Hamlet and pick up pink. We all need our Into the Woods now and again – we need our Uncle Vanya, our Ghosts and our Long Day’s Journey into Night – but on a Sunday afternoon, in the middle of a cold snap in the most cynical city in America, it’s nice to have a little taste of Pinkalicous, too. At the very least, it’s something to talk to the shrink about come Monday…