The Dreamscape Theater has just landed on the "it" list for notable companies. Their contribution to the Fringe Festival is The Burning Cities Project, a dramatic ensemble piece conceived and assembled by Brad Raimondo. This is Play With a Mission: to define and understand tragedy. And not Hamlet-level tragedy: we're talking Holocausts and Hiroshimas, Dresdens and Pompeys (and, of course, 9/11). 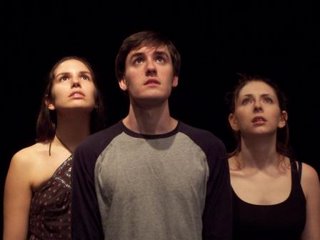 Danielle Monica Long, Mark Lindberg, and Laura Moss find
themselves struck by the moment in The Burning Cities Project.
Director Jennifer McGrath has assembled a diverse cast to populate this fractured world, and she guides them expertly through spoken word, movement, fragments, modern dance, dark comedy, avant-garde, and a political rant. Between each piece, an actor speaks directly to the audience about the purpose of the show, as in The Laramie Project, and on the whole, it's a moving evening.

Interestingly enough, the more recent the tragedy, the worse the presentation: the Katrina piece, entitled "The Usual Conversation," is too jaded and off-key to be strike any nerves or funny bones, and the 9/11 scene "Everyday/That Day" winds up digressing from loneliness into melodrama. As affecting as Mark Lindberg's in-character confession of loneliness is, the scene doesn't fit the oeuvre of the piece, and makes the early moments of The Burning Cities Project a little unsteady.

Luckily, the rest of the evening is a phenomenal tour-de-force of young actors who know how to strike a chord with the audience. The horrific bombing of Dresden, a much ignored tragedy (unless you count Vonnegut's Slaughterhouse-Five), springs to tear-soaked life in the most relentless piece of the night, "Survivor's Words." On the other side, the way in which people dance around the topic of the Holocaust (or the more recent genocides in Sudan and Rwanda) finds a fitting satire in "The H-Word." Ricardo Perez Gonzalez plays the manic host of a Jeopardy-type game show where all the answers vilify the Jews. ("Q: Oprah calls them the future, Jews eat them; A: the children.") His relentless badgering of a conscientious contestant (Brad Raimondo) makes us feel bad, up until the "Final Solution" round reveals the contestant's own shortcomings: "What horrible tragedy resulted in the deaths of over 12,000,000 people?" "The Holocaust." "Wrong. The slave trade." "Well, yeah, but that's exaggerated."

This strong performance piece stands well in comparison to other cultural awareness plays like The Vagina Monologues. But even alone, The Burning Cities Project is a strong and passionate presentation of suffering and the human will to express (and thereby overcome) it.
Posted by Aaron Riccio at 8/27/2006 08:16:00 PM