The Uncanny Appearance of Sherlock Holmes

Dr. John Watson and Detective Sherlock Holmes take on one final mystery, aided by Holmes's female counterpart, Jacqueline Derrida. Their search for clues is accompanied by rock music, acrobatics, and a few psychological twists and turns. 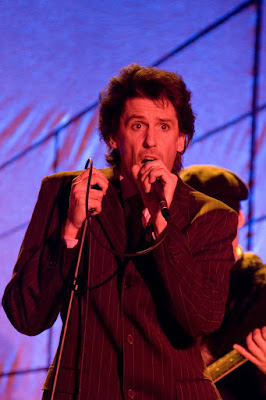 The Uncanny Appearance of Sherlock Holmes presents a dreamlike murder mystery with a rock-and-roll soundtrack. Sherlock Holmes, Dr. John Watson, and Holmes's female counterpart, Jacqueline Derrida, attempt to uncover the truth behind the supposedly accidental death of behavioral scientist Nietzsche. However, this musical, penned by Brad Krumholz, is far from a classic thriller: the impressive ensemble not only acts out the story, plays all of the instruments, and sings all of the songs in the musical, but the limber team also performs acrobatic stunts with seemingly effortless precision.

Literary theorists will recognize the reference to Jacques Derrida, the father of deconstructive criticism, but to those unfamiliar with his practices of deconstruction, A Dictionary of Critical Theory describes it as “a theory of reading which aims to undermine the logic of opposition within texts." Indeed, the female Derrida serves as the deus ex machina of the play, threatening to unravel the relationship between Holmes and his arch-nemesis, Dr. Moriarty.

It's not surprising, then, that Krumholz takes a Derridean direction: his director's note invites the audience to "entertain the idea that appearances can be deceiving and even, at times, quite uncanny." Krumholz's mission is well-executed, as the actors use their bodies as props and set pieces, picture frames serve as doors and suggest cramped crawlspaces, and audience members participate in a "mysterious" mind game. Most deceiving of all is Dr. John Watson, played by Tannis Kowalchuk, who occasionally removes her character's facial hair and dons a gown. The staging implies some romance between Watson and Holmes, but the detective never acknowledges his assistant’s gender and gazes right through her. When Ms. Derrida suggests a twist on the well-known rivalry of Holmes and Moriarty, she asks the audience to question their own reality. Perhaps then, Watson's gender transformation is best left untouched, leaving the audience to make their own conclusions regarding the character's role.

Brett Keyser gives the titular character a sense of eccentricity and Liz Eckert and Sarah Dey Hirshan's many roles are an impressive undertaking. As a whole, The Uncanny Appearance of Sherlock Holmes achieves its goal of a surrealistic take on a classic literary figure. But it is not without imperfections: "Cerebellum" and "Threshold" make for memorable songs, but most of these interludes felt unnatural (and unnecessary), failing to enhance the story, especially when the words were inaudible. Still, while it may make more sense to focus on the gymnastics rather than the music, The Uncanny Appearance of Sherlock Holmes is a creative, alternative look at one of the great figures in literary history.