Eighty years after this play granted Eugene O'Neill his second Pulitzer, the weighty drama of this...well, weighty drama...still grabs hold of the audience. From the man who knew family dysfunction better than most, the Metropolitan Playhouse has produced a classic interpretation without skimping on the fight scenes. 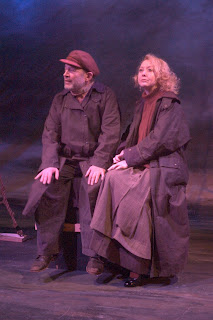 Whether searching for family ties or cultural identity, the characters in Eugene O’Neill’s Anna Christie resonate with a longing for stability and a place to belong, universal themes that still apply today. This turn-of-the-century story about an immigrant’s working-class life in lower Manhattan speaks, on many levels, to what it means to leave one home behind in order to discover another, as many New Yorkers (even today) once did.

The play begins at a pub as the drunken Anna Christie (the stunning Jenne Vath) gets to work. She orders a drink, swills it quickly and asks the barkeep, Larry (Zachary Spicer), for another while she waits for her father Chris Christopherson (Sam Tsoutsouvas) to show up. As for Chris, a bumbling widower cloaked in layers of gray flannel and a fitted fisherman’s cap that he almost never removes, he has never known how to care or provide for his daughter. His heartbreaking dilemma is that that’s never kept him from loving for her. His abandoning her to distant relatives as a girl, for example, he sees as leaving her better off while he braves the high seas, fulfilling the long legacy of seafarers in his family. In choosing this life for himself he also determines Anna’s, and this attempt to take control of one’s fate backfires more than once as the play ensues. Mr. Tsoutsouvas takes a simple, uneducated character and breathes life into his lines, perfecting a thick Swedish accent to match the script’s dialectical phrasing of broken English.

Through four engrossing acts Anna’s fighting spirit shows a stomach for rough travels and tough times. Fighting to keep her head above water--even when surrounded by it-– she tries to leave behind a soiled past in order to win the heart of the honest Irish-Catholic coal stoker, Mat Burke (a subtle yet effective Roger Clark). No matter Anna’s temperament, whether vulnerable, irrational, defensive, desperate, or even at times daring and giddy, Mr. Clark plays off her with gradual, believable reactions. Even in a three-piece suit and clean-shaven mug on his way to propose to Anna, his brute masculinity shows through. Once again, background and occupation imply a character’s lot in life, and Anna, in answering Mat, must ultimately also answer to her own fate. An added flourish to Mr. Clark’s performance is the genuine rogue accent acquired from years of studying his craft in Ireland.

The three principle actors are matched by a great supporting cast (including an incorrigible Karen Christie-Ward and a snappy Mr. Spicer). Robert Z. Kalfin directs down to the smallest details, even dressing the set with vintage magazines and newspapers. With the help of set designer Michael Anania, Mr. Kalfin uses a few specific pieces of coarse wooden furniture to give the illusion of larger areas, such as showing just a table and tap, but evoking an entire bar. The costumes (designed by Rebecca J. Bernstein), ocean sound effects, and lilting guitar instrumentals just add finishing touches to an already strong production.

With a strong sense of scene and driving action that doesn’t falter even after two and a half hours, the Metropolitan Playhouse takes its audience along for the ride of Anna Christie. By simply sitting still with rapt attention we let O’Neill’s characters discover for themselves the paths they choose, and the moments in life that must be taken with a grain of sea salt.