The prolific Alan Ayckborn’s Season’s Greetings is rife with the hijinx and drama of the holidays, but in this flattened revival by the Hudson River Rep., the stocking is stuffed with the coal of cheap gags, leaving the real meat of Ayckborn’s writing (and rich characters) untouched. 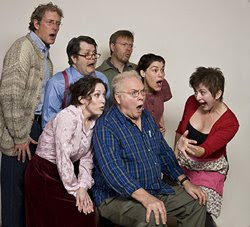 Reviewed by Lyssa Mandel
‘Tis the season for unbearable family gatherings and tediously precious holiday traditions. The prolific Alan Ayckborn’s Season’s Greetings fits that bill, but in this flattened revival by the Hudson River Rep., the stocking is stuffed with the coal of cheap gags, leaving the real meat of Ayckborn’s writing (and rich characters) untouched.

The set is like the production: it’s festively dressed, but not large enough to meet the mad, flailing rush from room to room. The cast gives an energetic performance, but without nuance. And though the pratfalls and commedia dell’arte archetypes are present in this heavy farce, it’s hard to feel the human drama when the performers aren’t truthfully connecting to it.

Ayckborn’s characters are a spiderweb of neuroses, come to party for Christmas season. Belinda, a repressed housewife and her cold husband Neville are joined by the angry, slightly senile Harvey, the nerdy, has-been doctor Bernard and his batty wife Phyllis, the impatient, pregnant Pattie and her oblivious husband Eddie (Neville’s drinking buddy), and Belinda’s self-deprecating sister Rachel.

What makes this Christmas different from any other is the arrival of Clive, a tall, writerly stranger who is a guest of Rachel’s and a distraction to everyone in the house. Clive’s roguish presence is enough to bring to light the sharp dissatisfactions in each of the party’s marriages and to stir up omnipresent mistrust and tension. A puppet show goes awry, the women embark on a primal chase for this new man, and even the toys under the Christmas tree are involved in a ramp up to a finale that packs half the punch it should. James Weatherstone, despite playing the boring Neville, turns in the most natural performance of all: he even has a tolerable English accent. Foster Davis is a playful, questionable Clive, evolving from naïve and likable to a bit of a slimy jerk. And Byron Loyd deals with pitiable Bernard by taking him and his puppet show seriously, crafting a few moments of silliness and failure that feel deeper than the rest of the comedy.

I would be a Grinch if I didn’t mention that the packed house was laughing at the obvious punch lines. But the grinding Christmas music during breaks, the overemoting, and the shameless, eye-rolling slapstick (that isn’t grounded by the deeper humanity and unhappiness originally written for these characters) reduce Ayckborn’s play to its face value. It deserves more than this.
Posted by Lyssa at 12/26/2008 02:55:00 PM

As Neville would say, "That's curious, that is," You obviously know not what a farce be.