Crawl, Fade to White, the seventh production of the playwright-run 13P, is as unnerving as it is rewarding. Plots do not fully cohere and characters hold onto their secrets, but it is through the ambiguities of her theatrical world that Sheila Callaghan constructs a landscape of loss more honest than a confession, and more haunting than a trance. 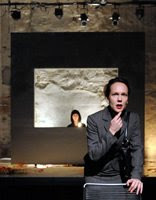 If the ground is bare in October and it’s 90 degrees out, can you still call it a “fall clearance sale?” Dan and Fran, an elderly couple in Sheila Callaghan’s new play Crawl, Fade to White, don’t think so: The play opens with the pair sitting in their home, cutting leaves out of colored construction paper. With autumn gone missing, their crafts hold the spiritual force of a rain dance, filling an absence by force of will. Their small ritual inaugurates a theatrical event that does not so much explore loss as a theme but give it a shape, full of holes that yearn to be unmade.

The plot of Crawl, Fade to White is mostly impressionistic, but loss is its structural core. Dan and Fran mourn the loss of their two children in an unnamed “tragedy.” Their neighbor Louise nurses a broken heart left by her daughter’s father, though they were lovers for barely a year (she was 15) before he fled. For their grown daughter April, who never met her father, his absence remains acute and crippling. In fact, when we first meet her, back from college with her boyfriend Nolan, she acts childishly, trying to steal back a lamp he once touched.

In Anna Kiraly’s evocative set design, beneath the raised stage that represents Dan and Fran’s house there is a line of soil bearing a collection of discarded children’s toys—a visual reminder of each character’s troubled relationship with childhood. Kiraly’s set, combined with Paul Willis’s vivid staging, allows loss to structure the audience’s experience as well. Settings are bounded by pairs of tall white flats, set at right angles and placed on wheels, that adjust for each location but leave the scarred interior of the Ideal Glass Gallery always visible. Scenes are interspersed with the sound of strings, barking, crying, and rainfall, though images of violins, animals, babies, and rainwater are nowhere to be found. The sparsely chosen props—a beach chair in the couple’s yard, a telephone in their living room, a chair in a neighbor’s house—do not suggest a more elaborate location in a realistic world: rather, the locations in question are that bare.

The play is meant to feel disorienting: each short scene (and line of dialogue) feels intentionally, abruptly, unfinished. April refuses to let the lamp out of her sight once she finds it, Dan and Fran claim the young students as replacements for their lost children, Nolan (who faces his own demons) finds healing after a lovemaking scene with Louise—it's not rational, but for souls desperate to fill the gaping voids that define them, emotion and impulse becomes logic. The actors bravely eschew rounded psychologies, letting a mysterious inner logic ground their characters in external will and drive—Jocelyn Kuritsky’s April shakes like an overheated bomb, while Carla Harting’s Louise applies lipstick like an addict taking pills.

The surprising effect of all this ambiguity is to make us pay more attention, to imbue the simplest of actions (a Polaroid camera flash, the wearing of an apron) with dire importance, so that we participate in the play’s vain grasping for any object, action, or memory that can bring clarity and closure. Callaghan’s vision is bleak, but it is also true to the denials, insanities, and backward glances that constitute psychic wounds refusing to scab over.