Despite a few bum shops in this "All-the-world's-a" mall, Like You Like It, an '80s light rock riff on Shakespeare, is quite likeable. Alison Luff, Hollis Scarbourgh, and Trey Compton are such charming A+ actors that, when they're in the midst of a well-executed number from choreographer Keith Andrews, and wearing Hunter Kaczorowski's slammin' clothes, all you see is a blur of comic cheer--and that's something we can all like. 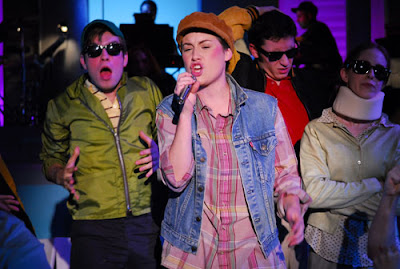 Transposing Shakespeare to high school is nothing new--Taming of the Shrew became 10 Things I Hate About You, Othello simply stood for O--and that's to say nothing of all the giddy musical riffs out there, like Kiss Me Kate, or the current production of Ilyria. But don't just shrug off this '80s take on As You Like It with a laconic "Whatever," or a lacerating "As if!" Sammy Buck (Book/Lyrics) and Daniel S. Acquisto (Music) may not be particularly ambitious with Like You Like It, but they are in firm territory, and in a fine production from the Gallery Players, in this, their second original musical production (following last year's Yank!).

Despite cutting out the social satire (and Jacques himself), the musical hews rather closely to the original. The one addition, the "narrators," rockers Jackie West and Eddie Van Beethoven (Jennifer Blood and Lance Olds) and their band, the "Seven Stages of Man," only make it easier to self-satirize the plot, enhancing the crowd-pleasing narrative, (now with 80s affectations that include Molly Ringwald, Rubik's Cubes, Swatches, and Wonder Twin powers). Apparently, cannibalizing a show is fine, as long as you use authentic spices, and keep a smile on your face. (For an instructive glimpse on how to make the most of something, keep an eye on Elisabeth Ness, who plays the hell out of the bit chorus part, "Neckbrace Girl.")

As for the story, Orlando (Nathan Johnson) is dating popular girl Audrey Shepherd (Caitlin Kent), but worries (in the aptly titled "The Song About Orlando") that nobody really likes him. The one exception is Rosalind (the fantastic Alison Luff), but she's just as shy about taking a risk as he is--a problem that is solved when Orlando's brother, Oliver (Clint Morris), suspends Rosalind and her cohort, Celia (Hollis Scarborugh). In order to spend the day wisely--shopping their cares away at the enchanting, newly opened Arden Mall--Rosalind disguises herself as a boy, Corey, while Celia channels a rebellious Madonna. They're joined, of course, by the car-driving class clown, Walter "Touchstone" James (a delightful Trey Compton), who has a crush on Celia. In one clever gender-bending twist, Sylvie and Phil (originally shepherds, but now role-reversed students, played by Brynn Curry and Michael Lowney) are best friends, dealing with the sudden revelation that Phil has fallen for Corey. (As does poor, misunderstood Audrey.) There's a lot going on, but despite the very clever Act I closer, "Complicated," the jokes are as broadly painted as the plot.

Where Like You Like It suffers isn't in the story, nor is it in the surface (Keith Andrew's choreography and Hunter Kaczorwski's costumes nail the period), but rather in the music. Musical director Jeffrey Campos isn't to blame--the large chorus numbers sound just fine. But with the exception of Luff and Scarborough, too many of the lead singers are tame (which is ironic, given a song like "Be a Little Wild"), and while they generally hit their notes, there's little behind it. (This is most apparent in the sloppy "So Close, So Far Away" number, in the short duets between Sylvie and Phil, or when Orlando takes center stage.) Comedy needs more truth, not less: that's how you sell the humor.

But hey, if all the world's a mall, then we have to accept the odd Pottery Barn out along with all the other good shops, and taken as a whole--as in the fantastic, song-blending and utterly satisfying "Finale"--Like You Like It ends up quite likeable indeed.

I saw this too, and I think Jacques wasn't cut from the story, but changed. Jackie West seems to fill the acerbic role. Not to mention her name sounds close to Jacques, and she sings in the "7 Stages of Man," one of his speeches.