Poignant and delightfully absurd, Stretch pairs one hell of an actress with a fascinating lead role. 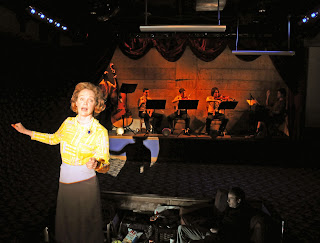 The fluttering click of an IBM Selectric typewriter. The perfect white glare of a spotlight on red velvet curtains. We are deep inside the consciousness of the glamorous, crass, ultra-capable personal secretary to President Nixon. And there she is—we have just met Rose Woods. "If you've never seen Nixon's, you've never seen receipts," she declares with real feeling. "Titled, totaled, signed and all properly done."

During the Watergate investigation, Rose Woods is believed to have erased a crucial 18 1⁄2 minute "stretch" of incriminating tape to protect "the boss." The good news is that you hardly have to know anything more about the Nixon administration to appreciate the delightful absurdity and poignancy of this bizarre play.

Stretch (a fantasia) shifts frequently from Rose's inner monologues to the nursing home where she resides in 2004, to the grungy basement where two teenage guys watch TV and smoke pot. One of the nineteen year-olds is an orderly at the nursing home who develops a strange fascination and a deep respect for "Miss Woods." The stoner scenes are set in a shallow pit center stage. The nursing home scenes and the scenes that occur inside the mind of Rose Woods unfold on the surrounding playing space. And at the back wall, an unconventional five-piece orchestra (two violins, an upright base, a trumpet, and an electric typewriter) is seated on a narrow strip of stage, often hidden by a curtain.

Kristin Griffith embodies the vivacious, middle-aged secretary with the heightened quality of a cabaret performer on the verge of breaking into song. In her dreams, Rose breathlessly narrates her experience of the fantastic kaleidoscopic visions that swirl around her. She dreams that she is Deep Throat skulking around the parking garages of Washington D.C., she dreams that she is an outraged Democrat at a protest rally (surrounded by her filthy hippie friends), she dreams that she is the Secretary (… of State!) wearing practical pumps and meeting with world leaders in foreign countries. While each dream sequence ventures into the realm of the absurd, each also contain a sense of emotional truth that adds depth to Rose's character.

Griffith's portrayal of the gruff, conspiracy-minded old lady in 2004 provides a strong contrast in characterization. This "present-day" Rose is disillusioned with politics. In the run-up to the presidential election, the teenage orderly reads her the newspaper and watches TV news in her room. He listens earnestly to every wisecrack and lecture she gives, trying to figure out who she supports and what she believes in. He is so fascinated with Rose that he watches her sleep when his shift is over. The scenes Rose shares with the retired high school history teacher who keeps trying to befriend her are often comical, tempered with flashes of vulnerability.

Director Emma Griffin does an excellent job of integrating the orchestra with the rest of the production. The music swells and recedes, underscoring the rhythm of Rose’s speech or playing in conversation with the actors. The red curtain between the musicians and the audience is raised and lowered at carefully chosen moments—sometimes revealing only one musician at a time. Composer and conductor Rachel Peters “plays” the IBM Selectric typewriter in costume as a secretary of the 1960s. The rhythmic whir of the keys adds an undercurrent of urgency to the score. This vision of a secretary’s bleak, monotonous existence at the typewriter provides a striking counterpoint to Rose Wood’s romanticized account of her life in the White House.

The best parts of Stretch occur outside the particulars of time and space. The personality of Rose Woods turns out to be a rich source and a fascinating subject, especially with Kristin Griffith bringing such verve and specificity to the lead role. The character’s snappy wit, larger-than-life persona, and captivating dream sequences are the highlights of the performance.