There are some fantastic elements in Susan Bernfield's Stretch (I mean that both ways), Emma Griffin's seamless direction and Kristin Griffith's gripping performance make this show utterly heartfelt, entirely believable. The result is a powerful, painful play about power, loyalty, and dreams, and it's no fantasia: it's pure magic. Gypsy doesn't have the only Rose to watch this season. 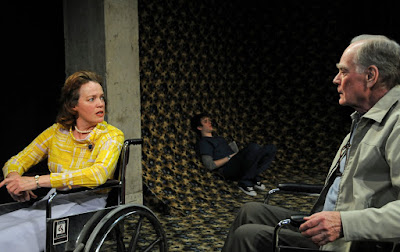 Even though her loyalty to Richard Nixon may have resulted in the intentional deletion of incriminating minutes of the Watergate tapes, you've got to hand it to Rose Mary Woods, who, as written by Susan Bernfield in New Georges's Stretch (a fantasia), is one hell of a dame. Brilliantly rendered by Kristin Griffith, this woman, a bundle of hard-fought opinions, smiles and beams as she struts in the spotlight of her memories: "Go fuck yourself! Sure, I can say that, sure, who else?" A bright bulb in a dim room, literally, lights rise to full to show her in a tacky nursing home in Alliance, Ohio, thinking wryly of the Bush/Kerry election. It's the first of many subtle tragedies in this marvelous play, to watch such vivacity wither into a wheelchair, to see her eyes narrow, her mouth tighten, and her body scrunch up. And then there's also a third Rose, a dream of a better time, whose speeches are accompanied by the clickety-clack rhythm of an IBM Selectric, not to mention two violins, a bass, and a trumpet, peeking out cabaret-like from behind a bright red curtain.

Don't be confused by the subtitle: there are some fantastic elements (and I mean that both ways), but Emma Griffin's seamless direction makes it all so believable. In fact, the second tragedy is that it serves as a reminder of how unbelievably believable that shady 2004 election was, especially when The Orderly (Brian Gerard Murray) reads to Rose verbatim out of The Columbus Dispatch. The third tragedy is The Orderly himself, a naive and apathetic man who, having lost the ability to dream, is drawn, moth-like, to the intense fire that he can see within Rose. He and his bud-smoking Bud (Eric Clem) represent the sad apathy of Generation Y, sitting center stage in a depression which is literally their basement but works figuratively, too. "Protect and defend the Constitution of the United States," they say, joking around in the same way that they diligently discuss SpongeBob's and Bugs Bunny's sexuality. And then there's Bob (Evan Thompson), a former history teacher who, although older and wiser than The Orderly, latches onto Rose for similar reasons: she represents actual history, actual life. His liberal idealism represents another type of naivety for Rose to crush with her sarcasm: "Yellin' and screamin', creating a diversion till nobody knows what the hell is going on. Whoohoo! Fox News!"

As the play gets more pointedly political, it also grows more immediate, and the dreams get less "nice-y nice"; gone are the "little tiny marines doing a tap dance" as her helicopter pulls away from the White House, present are the paranoid dreams that she may be Deep Throat, the fears of "wolves at the door." Those around Rose grow less passive, too, awakened by a world that has just reelected Bush: "Tell ya what scares me," Bob says. "These kids, now. Hell, they don't even scare themselves, they don't know power -- that it's even possible." Meanwhile, The Orderly, having outgrown his now-tweaking friend, makes a heartfelt plea for salvation: "Old people, still dreamin away, and I can't make one thing come out!"