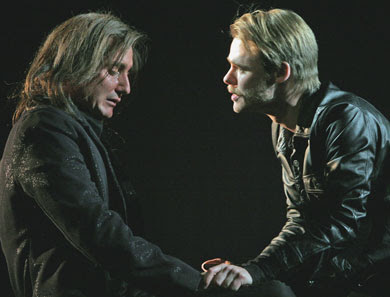 It's very noble simply to love and be loved in return, but when you're a king, love comes at a higher price. Edward II (Marc Vietor, with such believable longing and grasping physical prowess) may truly love Galveston (Kenajuan Bentley) and may in fact, be loved back (though Galveston teases and flaunts for a great many, as is his preening, sycophantic nature, Bentley plays him with something deeper reserved for the king). But his court is only the more irritated for it: Mortimer (Matthew Rauch), Lancaster (Davis Hall), and Warwick (Joseph Costa) kick up their heels at the titles so flagrantly granted to the low-class upstart; the Church, as portrayed by gaudy Archbishop (Raphael Nash Thompson), is irritated by the licentiousness of it; and Edward's wife, Isbaella (Claire Lautier) -- well, we all know what happens to a woman scorned, although Lautier keeps her head up for quite a while before turning to her misplaced fury.

As directed by Jesse Berger for his Red Bull Theater company, the work doesn't judge the homosexual currents any more than they would've been in the Elizabethan era that Christopher Marlowe wrote this for, but simply gives flesh to the page with a tautly erotic and highly physical staging that thrusts the action onto a narrow runway of a court that is half fashion show (I'd want to show off Clint Ramos's costumes, too), half military trenches. And while I'm no scholar of Edward the Second, Garland Wright's adaptation of it serves to heighten the emphasis on character rather than theme by setting the action in a malleable, anachronistic time, with language that is both harsh and pliant, all at once, something that's necessary for a plot full of reversals and sudden shifts in mood.

When Galveston returns to England for the first time, in the very wake of the old king's death, he imprisons the bishop who banished him (Arthur Bartow). In lesser hands, this would simply be a moment of satisfying vengeance, but Mr. Berger (perhaps after bloodying his hands so much in previous productions) goes one step further: Galveston all but rapes the holy man as he tightens the fetters, a point that also doubles as a bitter symmetry for what will eventually befall the king himself. So too does Mr. Berger handle a provocative scene later in the play, set at an opera house, in which we watch the king, lost half in love, half in music, waiting for Galveston to return (he has manipulated his wife, with false hope, into bringing back the very lover who displaced her): Galveston stands for a moment behind him, quietly savoring the power he holds over the king, along with the pomp of his own peculiar circumstances, and yet, when he touches the king's shoulders -- a simple touch -- the realization of that love would make even the coldest heart in the theater feel for the keening king.

More than love, however, the play also focuses on hate (if it is true that we should "Fie love that causes death and hate," what should we think of pure hate itself?). As Mortimer, Matthew Rauch is absolutely electric: "I am feared more than I am loved. Let them fear me," he utters without a hint of melodrama. He is the opposite of Edward -- decisive and strong -- and yet the court is no better in his usurping hands than in the rightful king's. He has a true love, too, in Isabella, but he never allows that to stand between him and power; instead, he channels his frustrations onto the former king, now a prisoner who squats, near-naked, in a pit of sewage.

Viscerally, Edward the Second is less satisfying than their previous revival, The Revenger's Tragedy: this production is efficient, and often bloodlessly so. (I'm told several squibs had technical difficulties when I attended.) But intellectually, Edward the Second is full of satisfying parallels and points about what happens to those leaders who ignore their subjects, and to those who force their love upon others, with little regard for personal choice. The warning comes from Edward's son, Edmund (Raum-Aron), who is forced to grow up all too fast, a steely, unhappy child who is the bleak start of a future strewn with corpses.