Nick Fondulis gives a commanding performance as Gaveston, beloved of the king and hated by everyone else, in Tom Berger's handsome production of Christopher Marlowe's Edward II. Unfortunately, the rest of the cast project varying degrees of ineptitude. 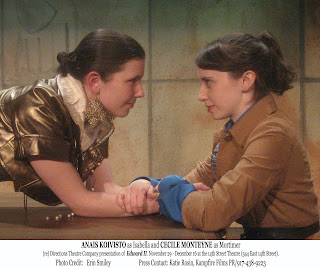 Earlier this season, I bemoaned the fact that a rare New York staging of Christopher Marlowe's brilliant The Jew of Malta, featuring the estimable F. Murray Abraham, was saddled with an unimaginative staging. The chance to introduce a new audience to this wonderfully inventive dramatist was, essentially, squandered. Now, two productions of his Edward II are unfurling simultaneously, in similarly minded, modern-dress production. Judging from Tom Berger's handsome mise-en-scene, that belated introduction now seems entirely possible, despite some wildly uneven acting.

The drama unfolds around the strong, somewhat inappropriate (read: homosexual) relationship between the recently crowned titular king (Jason Summers) and Pierce Gaveston (the sensational Nick Fondulis), who was banned by the new king's father. When Gaveston reappears in the court, it is like a lover's return; Edward hangs off of him and showers him with titles and tributes. Soon, they are parading around the court like a Hollywood couple staging a public display of affection, and the court's advisers are not pleased.

It is easy to understand why this fluttery and weak-willed monarch is so intoxicated by his "beloved minion": as played by Mr. Fondulis, he calls to mind all modern stereotypes of celebrity hangers-on, acting the part of the perfect crony. Outfitted (by David Withrow) in clothing that would make even the most unconventional Project Runway contestant blush, he emits an aura of unbridled sexual fierceness that often stopped the action dead in its tracks. This was my first experience with Mr. Fondulis, but his comfort with and command of classical language is strong enough to advocate for him to become a permanent fixture of productions of the Elizabethan repertoire.

However, one quickly realizes that Gaveston is not developing into a major character, and, unfortunately, the rest of the cast simply cannot replicate Mr. Fondulis' seismic energy and verbal polish. Mr. Summers gets off to a respectable start as Edward, and offers several convincing portraitures of an affection-starved noble, but as the drama wore on, he seemed to lose interest, and walked through one of the most thrilling of downfalls. Conversely, Anais Koivisto's portrayal of Edward's queen, Isabella of Valois, flounders at first, and only comes alive in the final moments of action. Even with her late resurgence, though, she fails to prove outright that she is comfortable with the language of the play.

This smart and literate adaptation, written by Mr. Berger and Erin Smiley, reverses several gender roles, most notably that of the villainous Mortimer, who plans the overthrow of Edward. The concept is admirable, especially since it is posited that Mortimer and Isabella are, like Edward and Gaveston, gay lovers. However, in the hands of actress Cecile Monteyne, we are given a usurper as mild-mannered and speculative as the ruler she longs to see dead. Monteyne also portrays the relationship with Isabella as one of real, emotional love, a poor character choice. Mortimer, who is supposed to be as ruthless as Gaveston--this is why she views him as a threat--should be seen manipulating the queen to achieve her own ends, not cooing lovingly into her ear.

It's a shame that Mr. Berger couldn't put together a better group of actors, because there is a lot to recommend in his fine production. To my surprise, his use of newscasts to frame the action as England descends into civil war never grew annoying; in fact, the final broadcast chillingly illuminated the modern phenomenon of spin. The production is stark and minimalist, and lets the beautifully cultivated verse speak for itself. And, of course, there is Mr. Fondulis, turning in one of the most utterly watchable performances available in New York at the moment. His Gaveston doesn't appear in the second half of the play, for reasons that I won't reveal here. From the moment of his departure on, all of the kinetic energy vanishes. I should stress that this is the fault of the remaining performers and not the text. One should feel privileged to hear Mr. Marlowe's words, even coming from less than capable mouths. This is a case where the play truly is the thing.