By grounding Blasted in utter realism, Sarah Benson has found the true ground zero for Sarah Kane's controversially violent play. Things are painstakingly represented as they worsen, with the focus slowly pulling back from the domestic to the social to the human levels, always with that unrelenting frame keeping things fully in view. Even the surreal moments toward the fragmented end are now utterly human--and wholly indelible. 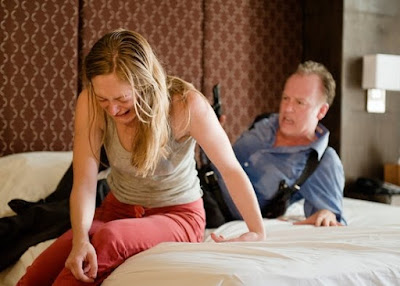 If Beckett had balls, Blasted is the play he would've written, stripping the physical comedy from his hopelessly hopeful looks at humanity. In Sarah Kane's world, the goad doesn't just force us onward: it anally rapes us; water isn't dangling just out of reach, it's locked in the corpse of a dead baby, awaiting our desperation. What's most troubling--and powerful--about Blasted is that it doesn't take place in some surreal landscape, where women are progressively buried in mounds of sand, or where men sit around in a wasteland, or spend their time in garbage cans. It begins in a fancy hotel room (meticulously created by set designer Louisa Thompson)--a place in which our anti-hero can say only "I've shat in better places than this." And thanks to Sarah Benson's unremitting direction, the play remains condemningly fixed in reality, even as it deconstructs into bleak surrealism.

To some people, this may sound rather unpalatable, but that's largely the point: in the midst of our blissful ignorance is an almost accidental violence, one which we are a part of, whether we choose to open the door or not. It's no accident that the central character, Ian (Reed Birney), is a misanthropic reporter: though he carries a gun, he's the most passive of people, something made even clearer when a soldier (Louis Cancelmi) breaks down his door. Even when the story is at his doorstep, he tries to ignore it, explaining things away first as a dream, then as something nobody cares about. And that's where Kane is so effective, and why Benson's direction is so brutal: this world cannot be mistaken as a nightmare nor can we ignore its characters.

You see, Blasted begins with picture perfect domesticity: Ian has brought his girl, Cate (Marin Ireland) to a fancy hotel room for some privacy. Except that by the looks of things, Cate isn't entirely grown-up (she giddily bounces on the bed), and as it turns out, her first dalliances with Ian were as a child. And although Cate cares for Ian--it's tragic to see her try to protect Ian from his self-destructive use of gin and cigarettes--she doesn't want him (and again, it's a sad, quiet moment when Ian undresses for her, only to be laughed out of the room). This doesn't excuse Ian's pathetic violence--he whines like a child and grabs her arm, forcing her to assist in his masturbation--or the next step, a between-scenes rape that's left blood on the sheets, but it keeps it framed in an understandable need.

The success of this production of Blasted is that the frame never collapses, even when the world explodes. Instead, there's the sense of a camera slowly panning out, going from the specific domestic and civil questions "How can we rape the ones we love?" to "How can we excuse things like this?" to the broader social questions ("How does it feel to have done to us what we have done to others?") and ultimately human questions ("How do we go on with what we've done?"). In conjunction with this, there's an outstanding cast that's able to capture such small gestures and miniature moments: even when the scene has pulled back to an almost unrecognizable distance, the underlying humanity is clear, and in that clarity, heartbreaking.

A perfect example: Ian, who has been raped, blinded, and left alone in the ruins, begs Cate for his gun--and she gives it to him, but not before removing the bullets, a moment that is equal parts spite and compassion (and Ireland is one of the few actresses who can carry that across with a single action). Ian then places the gun in his mouth--only to take it out long enough to make sure that Cate isn't standing behind him. The desperate sadness on Birney's face overrides the increasingly fragmented tone of the show, and in quick flashes--a perfect summation of life--we see him go through the stages of grief as he hovers between life and death.

This isn't just marvelous storytelling, it's marvelous everything, and it's through such intense work like this that we are better able to distinguish the hope at the end of this tragedy, just as we are able to pick out the moments of grim comedy and relentless truth. ("You hurt me," says Cate. "No, I love you," says Ian.) Tear down the walls, then, and see what's left.