The strongest moments of “A Crazy Sound” lie in exploring the unconventional sounds of an insane asylum, those that cannot be contained or expressed in the light of day. Yet the play quickly devolves into a traditional theatrical form, stunting Dario D’Ambrosi’s promising premise and opening scene. 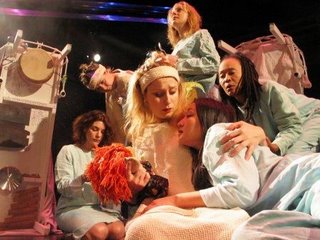 The inmates of “A Crazy Sound” (from left to right: Meredith Summers, Celeste Moratti, Lucy Alibar, Emma Lynn Worth, Kat Yew, Sheila Dabney.)
Credit: Jonathan Slaff.
Like all good experimental theatre, Dario D’Ambrosi’s “A Crazy Sound” begins in the near-dark. The bareness of the LaMama warehouse annex provides the perfect setting for six women curled beneath white hospital sheets, as a nun recites the Hail Mary up and down the corridor. The sleeping bodies soon pick up the recitation, and the audience is drawn into the possibility that finding this sound beautiful and incomprehensible insinuates that we are the ones made “crazy” by staying to listen to this sound. The opening five-minute sequence, modeled on D’Ambrosi’s observations from a stint in a psychiatric hospital in Milan, embraces all the possibilities of the term “experimental” and truly hooks the audience.

Yet when the lights come up, you are saddened by their return. The women’s vocalizations of their experiences turn trite when they are forced into the realm of regularly paced exposition, from the most benign (Lucy Alibar, exacting hilarious vengeance on a cheating husband) to the most grotesque (Celeste Moratti, counting and muttering as she limps around the hospital floor.) Songs from the inmates punctuate the story, and the plainness of the melodies becomes gratingly mundane when compared to the opening sequence. The inmates even put a fashion show, to delight the visiting daughter of Kat (Kat Yew), who despite her desire to be a good mother will never be able to get out of the hospital. As the women prance about in dolled-up hospital shifts, you don’t feel a longing to see them get out and live their lives, but rather a desire to see them try to get better.

D’Ambrosi seems to both embrace the women’s madness (and inexplicably use it to comic effect) and to insist that the audience be terrified by them. In explaining the women’s insanity, the play’s greater meaning is clouded rather than clarified. Though D’Ambrosi should be given credit for the exact diagnoses unknown, none of these women’s stories lead us to any conclusion about their actual madness, or about how the music they make is either a cure or a palliative. The women certainly seem to enjoy it (and so does the nun, inexplicably) but the audience leaves without sufficient sympathy or even interest. We start in the dark, yet the ending leaves us hoping for something a little bit brighter.

The strongest moments of “A Crazy Sound” lie in exploring the unconventional sounds of an insane asylum, those that cannot be contained or expressed in the light of day. Yet the play quickly devolves into a traditional theatrical form, stunting Dario D’Ambrosi’s promising premise and opening scene.